See our extensive articles on How to D.I.Y. with LetterBank

The key reason for this guide is to establish function over design parameters.

The optimal result of reading and applying the principals covered in this brief guide is to have a clearly visible, easily identified emergency and construction vehicles for first responders, highway safety and nighttime driving accident mitigation.

A brief background as to the wide range of graphic elements on existing vehicles:
There is no federal mandate to have uniform markings, however, making markings consistent and uniform makes the identification of key vehicles and obstacles less stressful and more clearly identifiable, especially in nighttime and weather obscured sites for both emergency and road work/maintenance crews.

In a nutshell, there are a variety of driving skills evident in the number of vehicle crashes into other vehicles and into stationary objects on highways. The incidence of crashes increases with factors of weather, wind, operating condition and maintenance of vehicles and the abilities of the drivers to perceive danger in time to take evasive actions to prevent a crash, or the causation or contribution to a crash.

Some of the abilities include but are not limited to in-vehicle distractions using car features or a cell phone or tablet, and driver incapacitations like intoxication, distraction with passenger, unfamiliarity of the vehicle, age or sight-related limitations, eating while driving and others.
According to the California DMV, additional distractions are in the nature of: 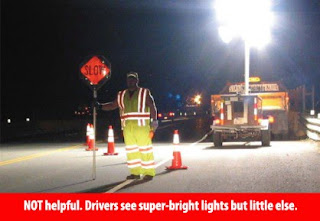 There are good reasons to drive at or below the posted speed limits when it's dark, when the weather is a factor and when the driver is tired.
When there is construction work on a highway, a typical scene is like this.
There are a number of unlighted diamond shape signs identifying the work zone ahead, usually followed by reflective cones delineating a slow-down or control area ahead.
During nighttime construction, there are usually extremely bright and disorienting lights in work areas, which cause a temporarily nighttime blindness in drivers. 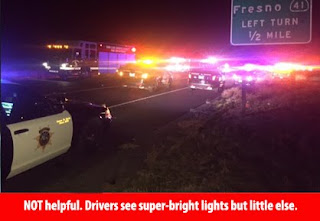 With emergency vehicle deployment, there are very bright stroboscopic pinpoint lights which on an otherwise unlighted highway, makes it very difficult to accurately perceive the side of the road that the emergency is on, if it's a multi-lane highway, or whether there is road debris from the crash preceding the place where the emergency vehicles are. For the competent driver coming upon the scene, it is distraction enough to not know how or where to safely proceed. For the age- or distraction-incapacitated driver, there is a highly stressful reaction, usually causing them to slow excessively, possibly leading to an increased frequency of rear-ending crashes behind these drivers.

So other than the adequate lighting of highways, are there other solutions or ways to mitigate the incidence of crashes in nighttime highway construction or first responders? 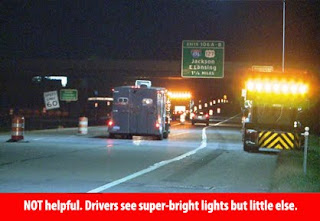 It seems that in the quest to use the brightest and latest technology, manufacturers have side-stepped the optimal use of lights and instead focused on increasing the level of brightness. As an example, emergency vehicles are designed to get the attention of the drivers ahead of them; they're not designed to become a highly-visible object in and to themselves. This bright concentration of stroboscopic lighting is very disorienting, as intended. Instead of using the lights to show drivers where there is an emergency vehicle, perhaps the lighting can be switched to an all-over soft lighting with highly reflective panels on the vehicle itself. 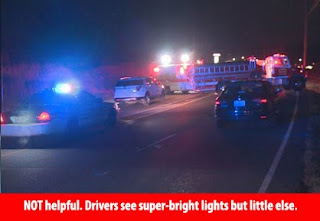 On highway construction vehicles, the same deployable highly-reflective panels would help to mark the roadway from a distance, allowing drivers to better be equipped to visualize the temporary obstructions on the road, and the workers moving about in the darkness.

Both of these kinds of nighttime highway emergency and construction uses may be accomplished by making the rear and sides of the vehicles uniformly illuminated and identifiable from a greater distance, and from the use of temporary shielded highway lighting to the rear, front and sides.

The vehicle lighting can be as simple as diffuse LED lighting that outlines and evenly lights the shape of the vehicle, making the path easier to anticipate and to navigate. Flat OLED panels that apply to the surface of the vehicles may be used for this purpose.
Panels may also be made of diamond-grade reflective materials without wording; just the panels themselves, set up to more clearly define work areas and narrow or temporary pathways.
For emergency vehicles, soft lights might be deployed to better illuminated a wrecked or disabled vehicle, much as road flares used to be placed at crash scenes, but to a clearer purpose, to mark areas to be avoided or for assistance in temporary traffic area avoidance.

While emergency vehicles may eventually be able to automatically deploy soft scene lighting that will help other drivers, the only other option readily available is to carry a series of lighted boards in the trunk of the car/truck that can easily identify the problem areas and mitigate the add-on crashes as a result of drivers attempts to avoid becoming part of the crash scene.

Construction vehicles commonly carry cones and reflective barrels, but usually do not use reflective panels or vehicle wash lights, which would make the shape and function of the equipment more readily recognizable, ergo functional at night.

Until emergency services and road work crews are mandated to provide more safety barriers and crash mitigation for the average driver, we will continue to advocate for better markings, more efficient markings and a better-educated public to advance safety on the roadways.

Comments? Feel free to leave your thoughts and questions here for a reply.